Here is a long overdue update – finally edited to include photos!

Dave pedaled into Edmonton with cross winds from the South doing their best to blow him into the path of passing vehicles, and Maxine flew in as planned and we stayed with Chad and Laurie – many thanks for the stay!Before Maxine arrived, Laurie took me to the West Edmonton Mall: 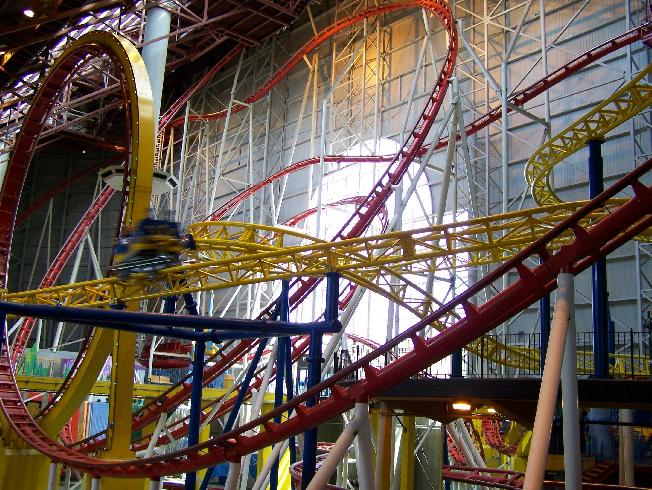 Jo and Steve were not with me, so I didn’t have to go on this monster!!

We set off for Wetaskawin in warmish weather, but raining. Had to ride back to the West some 25kms from Sherwood Park into the Prairie West wind! It got colder and colder, and by the time we reached WETaskawin, we were thoroughly soaked and freezing! Spent the evening with Maxine’s brothers Don and Bernard and their wives Bev and Pat.

Next day off to Calgary, and towards evening discovered all motels were full, so kept pedaling for a day’s total of 132kms to Airdre only to find the one motel with vacancies was in dire need of a thorough cleaning. We do not recommend The Horseman Inn in Airdrie! Just about ready to set up the tent at the roadside when we found a B&B – many thanks to “Apples and Angels” for a very pleasant stay! Next day to Calgary where our good friends Barry and Teena had booked us into a hotel – we were spoiled! Maxine spent the afternoon shopping for cycling shoes and clothes, Dave got introduced to the Calgary train system, and then dinner with Maxine’s brother Harold.

Breakfast at the hotel with Barry and Teena, and then out of Calgary and heading East expecting those Westerly winds we fought against every day 3 years ago – they were nowhere to be found! Crosswinds and 38 degrees Celsius (That’s 100 for our American readers!) The winds made sure we struggled again by shifting from South to Southeast, and then even going to Northeast!! We reached Bassano in time for their Rodeo Day Parade which we were invited to join: 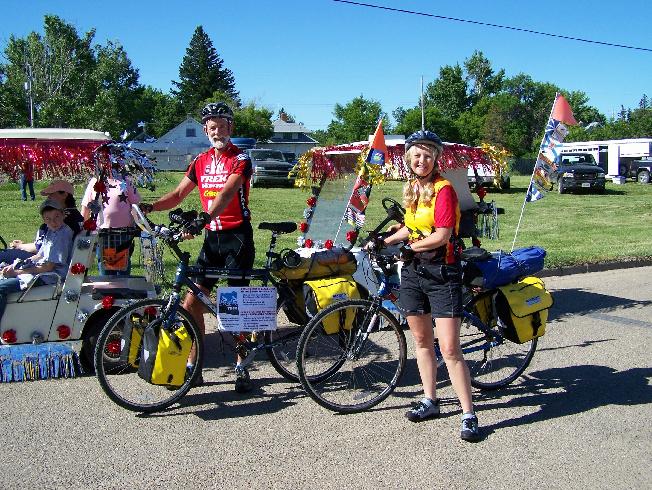 And we both rode with the decorated golf carts!

We went to this great cafe where the owners gave us free breakfast in appreciation of our Lung Association ride, so if any of our readers find themselves in Bassano, please support this restaurant! 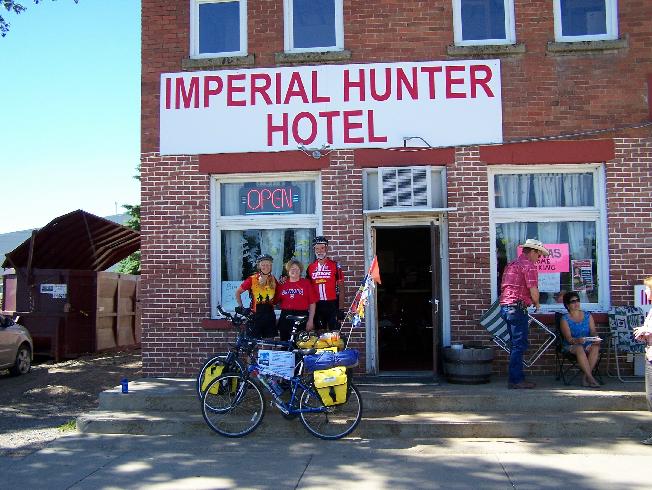 We continued cycling East on a very hot day with the temperature at 39 degrees in the shade and humid (USA 100!) Out on the highway with no shade and heat reflecting back from the pavement, Maxine got heat stroke, so from Suffield, she and her bicycle went ahead to Medicine Hat by taxi. The next day was just as hot about 35 degrees and again humid, and Maxine was still suffering from the previous day’s heat, so we decided she should use Greyhound to Winnipeg, and meet me there.

Next day again hot, so it was the correct decision for Maxine. I soon met Joseph from Germany celebrating his retirement by cycling across Canada, but after a couple of days, his route went south from me, but we hope to meet again after Winnipeg. Here he is breaking camp: 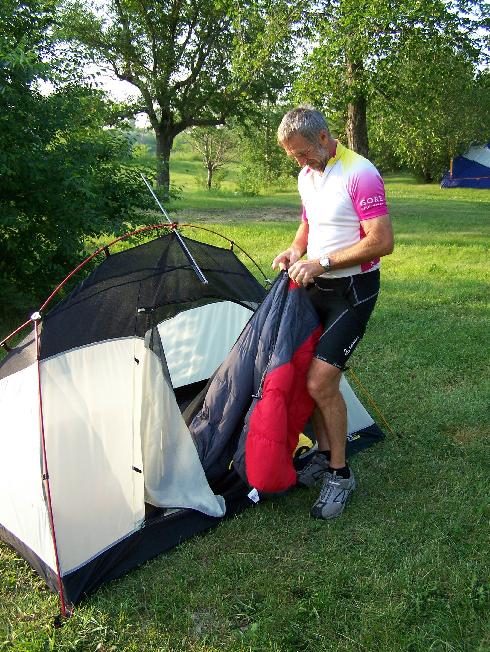 This was in Moose Jaw

After Moose Jaw we said “Goodbye” and I figured I had better get moving, so one day I made 201 kms with my gear set stuck in the “low” range so my legs were going like pistons to maintain 30kph plus!! Went through Indian Head and took this photo of my Travel Bug companion: 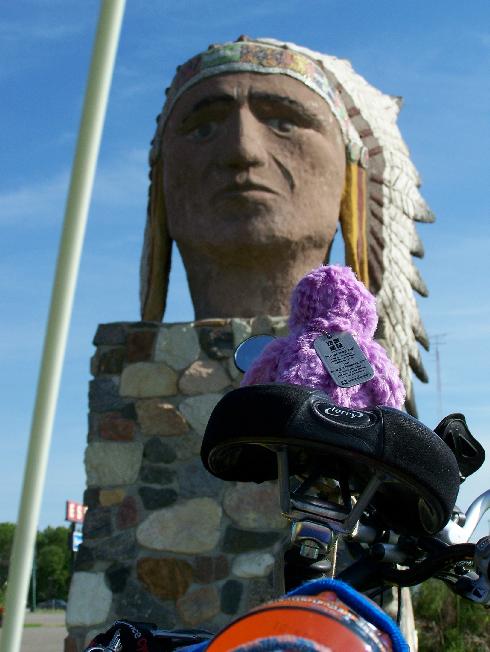 Maxine was kindly given the loan of a car from our friend Caroline in Winnipeg, and met me on the road with cool drinks and food! It was during this time that I got a flat rear tire, and in the process of removing the wheel, an axle nut fell off into the long grass – I couldn’t find it! Must have gone down a gopher hole! Limped into Regina with the rear axle held by a vice clamp and cable ties! Now the real trouble began – discovered my bike has non-standard threads on the rear axle (FG 10.5 metric)! Finally found a similar nut (Sturmey Archer axle) at Dutch Cycle. But more to come! I had to over-tighten the axle nut opposite the vice clamp, so on Highway 2 South of Brandon, that nut slipped – stripped threads! So, Maxine had to drive me from Brandon to Winnipeg where I could not find another axle nut anywhere, so phoned Fred back at DutchCycle back in Regina, and he put 2 axle nuts on the Greyhound delivered to Winnipeg next day – bike fixed!! If any of our readers are in Regina and need a bicycle or bike gear, please support Fred at Dutch Cycle – 1336 Lorne St. Regina. Tel (306)522-0484 (dutchcycle@sasktel.net) Those guys were very, very helpful!

Now, maybe I can get some West winds to blow me into Ontario?!