Maxine was born and raised in and around Edmonton where she was married and eventually became the proud mother of three boys – all of whom are now grown up and making their own lives away from home. The young family learned early about cancer and the suffering it brings when their father was struck down with this disease. After the loss of her husband, Maxine packed her three boys into their car and brought them out west to the Comox Valley on Vancouver Island where she had to find a home for her family, a new job and a new life. Here, the boys finished their education. Maxine is now retired after working as an Educational Assistant helping challenged students through their education. 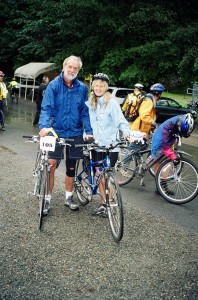 One day some years ago – and to the surprise of her family – she took up cycling even though she had never before done any serious pedaling! With her sons’ support, she was soon hitting 100 or more kilometers a day. They thought it was a phase or maybe a crisis their Mom was going through. Then, some 16 years ago, she took part in her first 200km BC Lung Trek to raise funds for the Lung Association. This has been one long phase! Maxine cycles whenever she can, but is not particularly fond of the cold weather, and has to admit to abandoning her bicycle to the basement in the winter! The bike Maxine uses is a Cannondale Quick fitted with a 30 gear set supplied by Experience Cycling in Duncan.

Dave was born in England, but within a few months of qualifying as an Engineer, he emigrated to Canada, where he began work in Montreal, then by way of a stint in Manitoba, found his way to Kitimat in BC. He has always been interested in sport, and whilst there was able, along with a friend, to make the first ascent of one of the Coastal Range peaks. From Kitimat, he eventually found his way to Africa (some say following in the footsteps of his famous namesake!) He got married in Cape Town, and then with his young wife, returned to Montreal where their daughter was born. Next was a move to a very undeveloped Dubai in the Arabian Gulf and the arrival of their son. Both children grew up in Dubai, but returned to Canada to finish high school and attend universities. It was while in Dubai that they also learned about cancer when their mother was diagnosed, and although she appeared to be in remission and the family returned to Canada, she did not recover and soon passed away at home. Both son and daughter are now out in the world making their lives, his son is in Ontario, and his daughter is teaching in Qatar. For cycle touring Dave uses a Cannondale Adventure 600 fitted out with a 54 gear set, and for racing a Cannondale SuperSix fitted with the Di2 electronic gear shift – both supplied by Experience Cycling in Duncan.

Maxine and Dave are now very happy to tell everyone about their 7 grandchildren!!

An interesting footnote to these bio’s is that Maxine had long cherished the thought of a ride across Canada, and Dave had wanted to do it since early childhood. Both however, hadn’t told anyone of these dreams for fear of being thought “a bit crazy”! Imagine their surprise one day when they confided in each other – so the first trip was “on”! As a “bit crazy” test of stamina, they went to Africa in the summer of 2004, and climbed to the highest point on Mount Kilimanjaro – 5,895 meters. Not all of their group made it to the summit, and they will both tell you that they were much older than anyone else around – in fact, the African Guide and Bearers called them Granny and Grandpa!