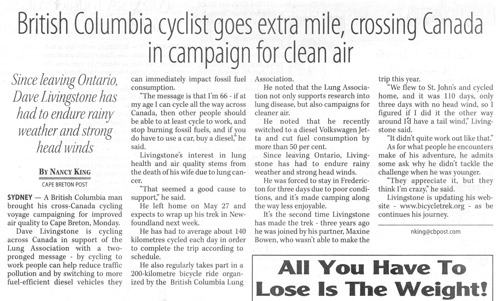 Click this link to hear Dave on CBC radio and scroll down to Tuesday, August 12, 2008. “Cycling Canada. We meet Dave Livingstone, a 66 year-old B.C. man, who is cycling across Canada to campaign for clean air and also raising money for the Lung Association. Livingstone (runs 7:48)”

Since Leaving Ontario, Dave Livingstone has had to endure rainy weather and strong head winds

SYDNEY – A British Columbia man brought his cross-Canada cycling voyage campaigning for improved air quality to Cape Breton, Monday. Dave Livingstone is cycling across Canada in support of the Lung Association with a two-pronged message – by cycling to work people can help reduce traffic pollution and by switching to more fuel-efficient diesel vehicles they can immediately impact fossil fuel consumption.
“The message is that I’m 66 – if at my age I can cycle all the way across Canada, then other people should be able to at least cycle to work, and stop burning fossil Fuels, and if you do have to use a car, buy a diesel,” he said.
Livingstone’s interest in lung health and air quality stems from the death of his wife due to lung cancer. “That seemed a good cause to support,” he said.
He left home on May 27th and expects to wrap up his trek in Newfoundland next week. He has had to average about 140 kilometers cycled each day in order to complete his trip according to schedule. He also regularly takes part in a 200-kilometer bicycle ride organized by the British Columbia Lung Association. He noted that the lung Association not only supports research into lung disease, but also campaigns for cleaner air.
He noted that he recently switched to a diesel Volkswagen Jetta and cut fuel consumption by more than 50 per cent. Since leaving Ontario, Livingstone has had to endure rainy weather and strong head winds. He was forced to stay in Fredericton for three days due to poor conditions, and it’s made camping along the way less enjoyable.
It’s the second time Livingstone has made the trek – three years ago he was joined by his partner Maxine Bowen, who wasn’t able to make the trip this year. “We flew to St. John’s and cycled home, and it was 110 days, only 3 days with no head wind so I figured if I did it the other way around I’d have a tail wind,” Livingstone said. “It didn’t quite work out like that.”
As for what people he encounters make of his adventure, he admits some ask why he didn’t tackle the challenge when he was younger. “They appreciate it, but they think I’m crazy.” he said. Livingstone is updating his website www.bicycletrek.org – as he continues his journey.