The prairies are finally behind me and after all that headwind we experienced 3 years ago, I had only ONE day of typical prairie westerly wind! On that day I made 201 kms. Heading east towards Elna, I saw a bear running down the bank towards the road, and on a collision course with me, so I slowed down and she ran across in front of me. As soon as she reached the other side of the road, she was followed by 3 (yes, three) cubs! When they found themselves out of the bush and on open pavement, they stopped infront of me and began to play. I braked hard not wishing to upset Momma bear, but she simply called, and they all ran off to join her! 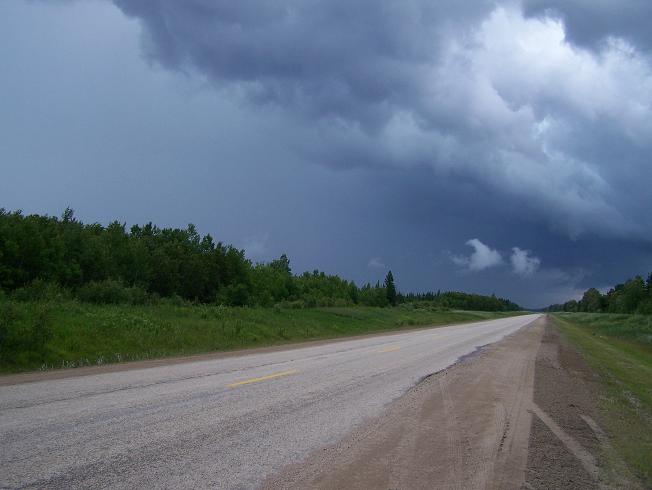 As I approached the Ontario Border, the weather became very cloudy and the rains began! At a small roadside cafe in Elna MB I was joined by a succession of cyclists all heading East! As we pedaled into the campsite at Rennie, there were 8 of us! We were lucky that the campsite owner realised we were likely too late to get any food in town, so she phoned the Pizza place and got them to stay open for us – we all ate pizza for dinner.

I missed the bears, but finally found a deer that stayed long enough for a picture!

A white tailed deer (I think!)

And on to Ontario…… 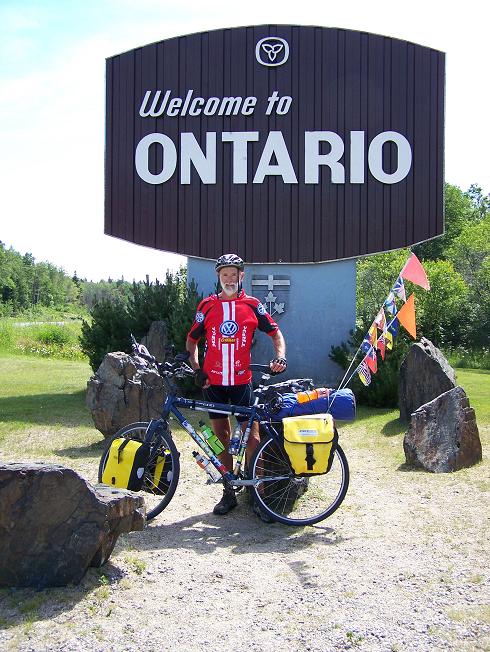 Crossed the border into Ontario, and the weather seemed to improve, and I had a sunny day to ride into Kenora. Some cross wind, but nothing to worry about. I was welcomed at the home of Don and Judy just North of the town, and had a great stay and wonderful food! Many thanks for that, and for the sandwiches and fruit “to go”! It was cloudy as I left, and by the the time I hade covered 20kms I was in very heavy rain with thunder and lightening all around!” I was hungry, but not wanting to stop as I knew I would freeze, but finally hunger overcame the cold and I stopped for Judy’s sandwiches! By the time I reached Vermilion Bay I was thoroughly soaked through, so decided to opt for a dry motel! Next morning again rain and generally bad weather weather, so with the forecast being better for tomorrow, I stopped in Dryden where I am writing this at the library.

Dry tomorrow as I head for Thunder Bay – I hope!